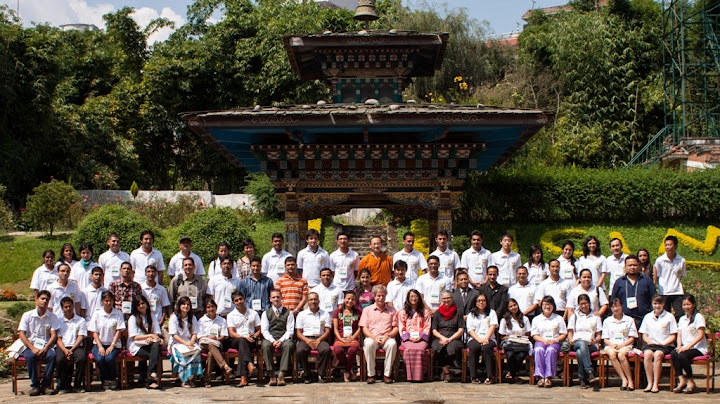 A platform for the youth to emerge as leaders in the direction of green economy, the five-day Asia Pacific Graduates´ Youth Forum on Green Economy successfully concluded on 29 September 2012, in Kathmandu, Nepal, where young graduates from 15 different countries and more than 40 participants were gathered together. This meeting was fruitful to give elicit notion to participation of regional youth in the globally important meeting of upcoming UNFCCC COP-18 focusing on six different agendas. The event was continuously being updated on social media by tweeting, uploading photos and videos, blogging - in the collaborative path of green economy to disseminate within the large group of audience.

The main organizer of the forum was The Small Earth Nepal (SEN) with co-sponsor of Consortium for Capacity Building (CCB) at the University of Colorado and the Asia Pacific Mountain Network of the International Centre for Integrated Mountain Development (ICIMOD), directly and/or indirectly more than 17 different organizations were involved to bring this event on Kathmandu to engage youth in capacity building, knowledge sharing and interactive sessions on the topic of green economy. The organizers had received more than 1000 applications and later from this forum five participants have got the opportunity to participate in COP 18 that is going to be held from 26 November to 7 December 2012 in Doha, Qatar.

On 25 September, the opening session was followed by a technical session in the conference hall of ICIMOD. The opening session was hosted by Mr. Tek Jung Mahat who gave an over-view of the context, objectives, structure and expectations from the workshop. Mahat has actively advocated for the ‘mountain agenda’ since 2003 and acts as RIO+20 Co-focal and team member of the UNFCCC COP preparation committee at ICIMOD. Dr. David Molden, Director General of ICIMOD has taken his speech covering on Rio+20 deliberation that “mountain reorganization should be at political level and we need to pressure on them through youth, since youth can translate world that what needs to do in future” he said. Mr. Gregory Pierce, from CCB mentioned that, “there is much more focused towards coastal regions issues that impacted from climate change but we must also need to be more sensitive in our mountain issues which is urgent requirement too. So we need to focus on multicultural, multi-disciplinary approaches of research regarding climate and water.”

Then the forum was leaded with Technical session, upto final day where lots of understandings about the subject matter from experts were shared. Curious and energetic participants exhibited their enthusiasm to seek higher possibility and benefits from green entrepreneurship, and were most amazed and boosted up with energy after visiting Organic Farm of Mr. Madan Rai during green excursion and Godavari Knowledge Park premises.  “Through this workshop, we’ve tried to not just give out knowledge but also focus on interacting with them. As organizers, we have learnt that the conventional approach of imparting knowledge doesn’t work with the youth. So along with empowering them, we also focused on helping them become informed decision-makers,” Dhiraj Pradhananga, President of SEN, said.

The focused six areas are Sustainable Energy, Green Entrepreneurship, Low Carbon Economy, Collaboration and Implementation in Policy, Youth Empowerment and Inclusion and Climate Change Adaptation. Thus this workshop included transfer of knowledge from expert presenters ranging from capacity building to pacing the path for green economy. Participants were urged to include these main actors as collaborator & partner and at the same time they were able to develop capacity on green economy, environmental governance and climate change adaptation.

"Happy New Year" - to be built as we wish it, together!