Behind the scenes: Bringing successful stories of young agri-entrepreneurs 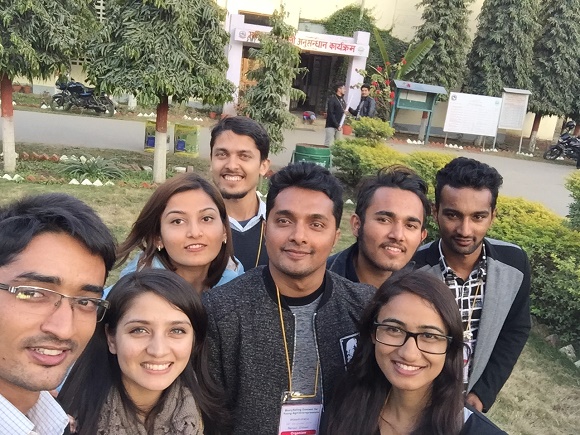 I just remembered a great quote by William Shakespeare: “Be not afraid of greatness. Some are born great, some achieve greatness, and others have greatness thrust upon them.”

By the time you are reading this blogpost, we (as YPARD Nepal) have successfully completed one of the biggest events in 2016: Storytelling Contest for Young Agri-entrepreneurs. In fact, it was a long planned event made possible by the organizing team. I would like to share the major associated inputs from the behind the scenes of this event.

Unfolding of the concept

After the National Youth Forum on Agro-based Entrepreneurship Development (#NYFAED15) in 2015, I was looking forward to designing a new project, which would continuously support the outcomes of #NYFAED15. In response to this, two ideas emerged: the mentoring program and storytelling contest. As a result of this, we started EduMala Mentoring Program from early 2016, which is still ongoing. However, we found that we were missing the real young farmers in this program, those farmers who were far from communications and technologies. Therefore, YPARD Nepal decided to give the storytelling contest a try, a very first concept to promote young farmer’s stories and award them in Nepal.

The Storytelling Contest for Young Agri Entrepreneurs was a national level competition which aimed to bring in the entrepreneurs with the most innovative and motivating stories of youth enterprises with the best social potential and impact.

In April 2016, I shared my idea among YPARD Nepal local representatives that in order to implement this new idea we needed an Event Coordinator to run the project successfully. We asked for a working plan among 3-4 interested candidates. Based on those working plans we decided to give the opportunity to Anil Banstola. In addition, we were happy to see the interest of the other applicants as all of these had actively participated in the first session of EduMala Mentoring Program where we discussed about the social event management and coordination among local and national agencies.

Genesis of the organizing team

Anil and I stayed silent for about 4-5 months as we were working on proposal development and looking for possible collaborators. In early of October 2016, Anil started to gather organizing team members. At first, Nikita Bhusal had shown her interest to work as the Communications focal point as she was also working as a Communications focal point at YPARD Nepal. Then Asmita Nagila joined as the Social Media focal point, Deepak Ghimire as the Content Developer, Kiran Timilsina as the Photo/Videographer, Suraj KC as the Fund Raiser, Shweta Adhikari as the Public Outreach focal point, and myself as the Team Leader and Facilitator. Our 8 member team was from very diverse background but we all wanted to bring our best performance together.

At first, we were looking for a web platform where we can run our contest. I approached Mr. Santosh Joshi, CEO of DreamWork Solution to support us through EduMala portal and he agreed to work together. Within 8 days of relentless work, we finally brought our website public. This became possible with the technical support of Mr. Susanta Paudel.

We launched our contest on 20th of October by publishing a call for application on YPARD website, along with teaser about the basics of the contest which was made by Kiran. Other members helped us to translate our call into Nepali language and sent it to the media. I was so happy, when I saw our call in Ujyaalo Online on the same day.

A dozen other media and newspapers columns followed with the coverage as thus:  AgroKhabar, RatoPati(1), RatoPati(2) , NewsAgro, YubaKrishi, TodayKhabar, NepalAaja, Indreni Online, CanadaNepal, including GFAR and FundsForNGOs websites. We sent our call to all 75 district agriculture development offices and major NGOs, requesting them to forward our call among their famers network. We were also promoting our call on social media by using “#KisanKoKatha” hashtag.

Before the launch of contest, we were sure that it would be very hard to bring more number of applications as most of the farmers have a low education level, hesitation to tell about their activities, and less interactive with modern technologies including social media and communications. We therefore developed a concept of “farmer’s representative” where any young person can submit a farmer’s story by taking his/her consent, but still not much as expected.

There were also difficulties in the application format where we were asking for 1-3 pictures and a story of 300-500 words. The age limit (18-39 years) and small amount cash prizes (NRs. 20,000 for each) were other hindrances for receiving less number of applications. Considering those issues, we extended our application deadline from 30 November to 20 December.

We organized a group meeting every Saturday during the entire event period, to share the progress report and set up strategies to work in better ways. However, our efforts were still insufficient to reach among large group of farmers who live in remote areas. To overcome this weakness, we organized a “Press Meet” on 1st December and once again, our call got wider attention in national media.

We were continuously approaching different organizations and institutions, to see if they were willing to join our venture. As a result, we received support from Agriculture and Forestry University- DOREX, National Maize Research Program, District Agriculture Development Office (Chitwan) and Aadhunik Krishi Kisan Sansar in different ways. It was just about a week before onsite grand finale, that ActionAid Nepal confirmed as a Co-organizer and NIMBUS as the Prize Sponsor for the event.

By the end of deadline, we received 43 stories of young agri-entrepreneurs from all over the nation. Those stories were very different from each other and truly representing the Nepalese agriculture.  Later, our Jury Panel (4 members) reviewed all the submissions and selected 12 finalists- 4 in each category (Motivating, Innovative and Social Impact). The shortlisted candidates were invited to the onsite grand finale at the organizer’s expense. 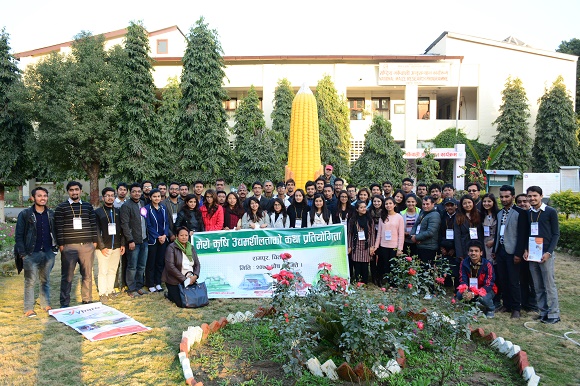 We mobilized 15 volunteers to manage the onsite event and to assist in finalists' presentation. Unfortunately, 2 finalists could not attend the finale on 30th December. So, there was just 10 presentations from young farmers. Each was given a 10-minute time slot and they presented their stories among 70 people who were from I/NGOs, companies, YPs, researchers, scientists, policy makers, farmers, and students background. Among them were Mr. Bishnu P. Adhikari, Mr. Khyam N. Adhikari and Mrs. Gyan K. Pun who were awarded as the “Most Motivating Agri-Entrepreneur,” “Most Innovative Agri-Entrepreneur” and “Agri-Entrepreneur with Best Social Impact” respectively with a Certificate, Cash prize of NRs. 20,000 individually and some agri tools.

I have been hearing that agriculture is the government’s priority since I was a child, but there is not much progress as expected. We have to think critically on how to inspire more young professionals to choose agriculture as a professional career to replace retiring farmers and to expand innovation on it. It is true that there are few progressive youths and professionals, coming up with agri-entrepreneurship as their profession, but their experience remains undocumented.

From this program, we tried to develop proper environment of experience sharing and motivate youths through examples of successful agri-entrepreneurs including their stories of learning and methods for outcome. Hence, we are assuming that we applied a noble concept for developing youth agri-entrepreneurism in Nepal.

Those stories are being shared all over Nepal through our different event media partners like Krishi TV, Krishak ra Prabidhi magazine, Ujyaalo Online, etc., which is bringing positive perception about agriculture is being developed among youths.

We extend our gratitude to all helping hands for their direct or indirect support in this program. Your interest, commitment and collaboration has been a key aspect to making this a success.

When I grow up I want to be a scientist