As one of the outcome of the 2017 Young African Works Summit, there was creation of groups of peers from the same country to participate in a long-term cluster coaching sessions together.

The YAW2017 Rwanda cluster led by Pacifique Nshimiyimana the founder of Real Green Gold and Clarisse Murekatete co-founder of Carl Group initiated the Farming & Agri-food Systems Connekt. The initiative is established to benefit both youth delegates enterprises in their journey post-summit and long-term career development. They designed activities that will help improve the potatoes and banana value chains. The mission to scale faster the growth of their enterprise on the base of quality produce with smart innovation was agreed upon. 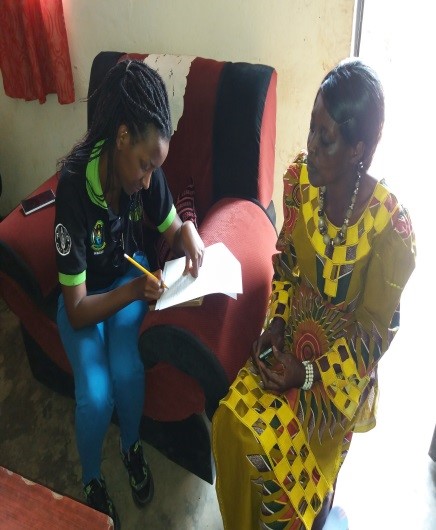 At the beginning field meetings went on from early July to map out both eligible farmers and their needed skills. Smallholder farmers in the value chain of orange fleshed sweet potatoes, face a major challenge of accessing a fair market. Also, another challenge such as climate change that came with droughts has adversely affected their crops with little or no financial means to afford irrigation.

On the other hand farmers in the banana value chain complained about unfair prices which can be traced to bad production. It was also observed that there is a certain level of skills gap stemming from poor access to modern agricultural practices even though an average farmer has more than fifteen years of experience.

Meet some of our smallholder farmers

Yankurije Drocelle is a woman with seven years experience in growing orange fleshed sweet potatoes in Shogwe Sector Muhanga District of the Southern Province in Rwanda. She is the leader of her cooperative DUFATANYE which is composed of thirty smallholder farmers. She grows them on a three hectares land where a part of the land is hers and the remaining portion rented.

Growing orange fleshed sweet potatoes has been so rewarding to me she says, she can be able to secure a health insurance, pay school fees for her children, improve her standard of living and also save. All these coming from the profits she gets from her potato farming business which is her main stream of income.

Nevertheless she still faces challenges that are preventing her from growing enough in quality and quantity. Climate change being a major challenge, dry seasons now take longer that we have to water our plantation which we fail as irrigation material are expensive she said.

Munyemana Jenvier, a young banana farmer in Kirehe district of Eastern province Rwanda. Jenviver grown in a family of banana farmers and now has more than 15 years experience growing bananas. Jeanvier wants to increase his banana produce quality and access premium markets to improve his livelihood.

I have been a member of different famers cooperative, but we never stopped experiencing unfair prices where you can even not find someone to buy your products during harvest seasons. Jeanvier now grows banana on his half hectare land and hopes to buy more land if he could get a good deal and chance to be trained on how to increase production both in quality and quantity.

The next phase of the initiative will be field training of the twenty smallholder farmers early in August 2017.

YPARD represents youth in the fight against food waste: Horizon2020 proposal has been submitted!

Youth as viable pillars of agribusiness growth in Nigeria

From the director's desk