The United Nations (UN) Sustainable Development Goals (SDGs) adopted by all (UN) member states in 2015 provides a generally agreed game plan to achieve sustainable peace and prosperity for people and the planet. The SDGs has similarity with the recently phased out Millennium Development Goals (MDGs) having its first goal to eradicating extreme hunger and poverty.

The SDGs equally adopted the same goal but now divided into two as their first two goals: goal 1  No poverty and goal 2  Zero hunger. These set the pace and trajectory to dealing with two of the worlds worst crisis and their effect while shining light in the direction of development support for years to come.

Statistics reveal that world hunger is on the rise again. A June 2018 report based on a projection by the World Poverty Clock and compiled by the Brookings Institute revealed that Nigeria has overtaken India as the country with the largest number of people living in extreme poverty, with an estimated 87 million Nigerians, or about half of the countrys population, living on less than $1.90 a day.

Statistically, over 820 million people are suffering from chronic undernourishment. This is due to situations such as extreme weather events from climate change, conflicts, economic slowdown, changing food consumption pattern leading to obesity (672 million people suffer obesity while 1.3 billion are overweight), food waste and other factors.

Arising from the facts and figures, and to incorporate SDG goals 1 and 2 in perspective, October 16 of every year was declared the World Food Day. The aim of this celebration is to create awareness among people people, world governments, donor organizations, development workers and corporations to encourage them to work together to ensure that everyone everywhere has access to essential safe healthy and nutritious food. This could be realized by adopting a more sustainable lifestyle while facilitating collaborations, knowledge sharing and being determined to help change the world for the better.

To fulfilling this mandate, YPARD Nigeria chapter in an effort to commemorate the world food day, on 17th October, organized a symposium with the theme Roles of Small Agri-Food Production System in Attainment of Food Security and Zero Hunger in Nigeria. This was organized by the Kano State Chapter of YPARD Nigeria. The event was held at the Kano State University of Science and Technology (KNUST), Wudil, Kano State Nigeria. 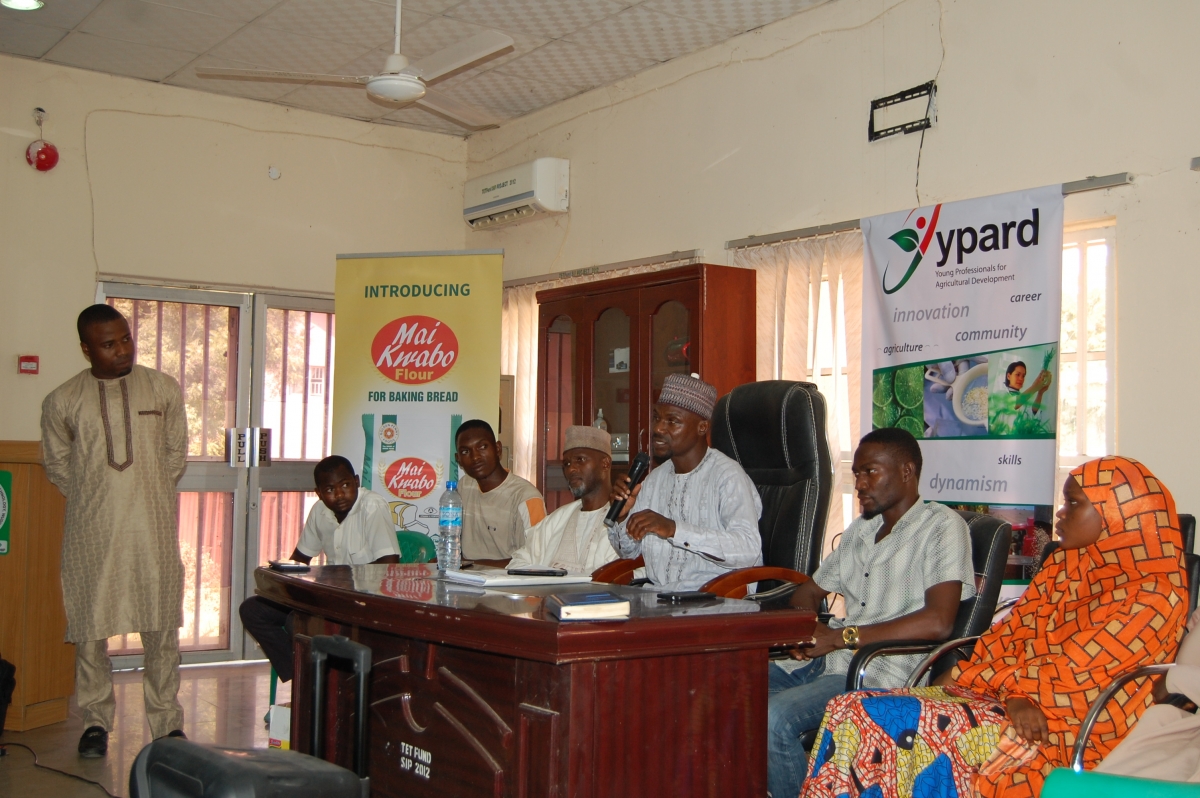 The programme co-facilitated by Nassir Sallau, the state representative and Mr Umar, a lecturer in the University, had in attendance dean of faculty, heads of departments, university staff members, practicing young farmers, members of the organized private sector, agro processors and over 200 students.

The symposium had well experienced resource persons on the agenda who spoke on salient topics that had direct contribution to food security and ending hunger. Jamilu Attahir, a YPARD member spoke extensively on the interconnectivity between poverty, hunger and malnutrition. Usein Al-Mustapha, an experienced agricultural investor enlightened the audience on the immense possibilities that abound by adapting and developing ICT as a tool to ending extreme poverty and hunger.

Furthermore, the Northern Nigeria Flour Mills represented by Mohammed Abdulwahab made an interesting presentation on impacts of commercial agriculture and smallholder farmers development in achieving food security. He mentioned his organization, Flour Mills of Nigeria as one of the many companies under which that require millions of tons of Maize and Wheat annually for their productions. A good quantity is bought from smallholder farmers across the country, but it does not meet up their needed quantity. Owing to the shortage, large quantities is being imported to complement the demand. He went ahead to emphasize the need to further support the production systems of smallholder farmers in order to increase their production and for them to have improvement in their living standards.

Another highpoint of the event was a 7-man panel discussion on how Nigeria can achieve zero hunger by 2030. This section was facilitated by Ayodeji Rauf, the Northwest regional representative of YPARD. The panelist comprised of students, researchers, university lecturers, private sector and young agri-entrepreneurs who offered a constellation of ideas on how hunger can be significantly relegated.

The programme, expressly approved by the Vice Chancellor of the University, Professor Shehu Alhaji Musa, was widely acclaimed to be successful, well thought-out, timely and impactful by the participants. To follow-up on the process of increasing YPARD membership, a good number of participants signed up to join YPARD. The hope is to further drive important conversations and actions among young people for a sustainable and inclusive agri-food development. 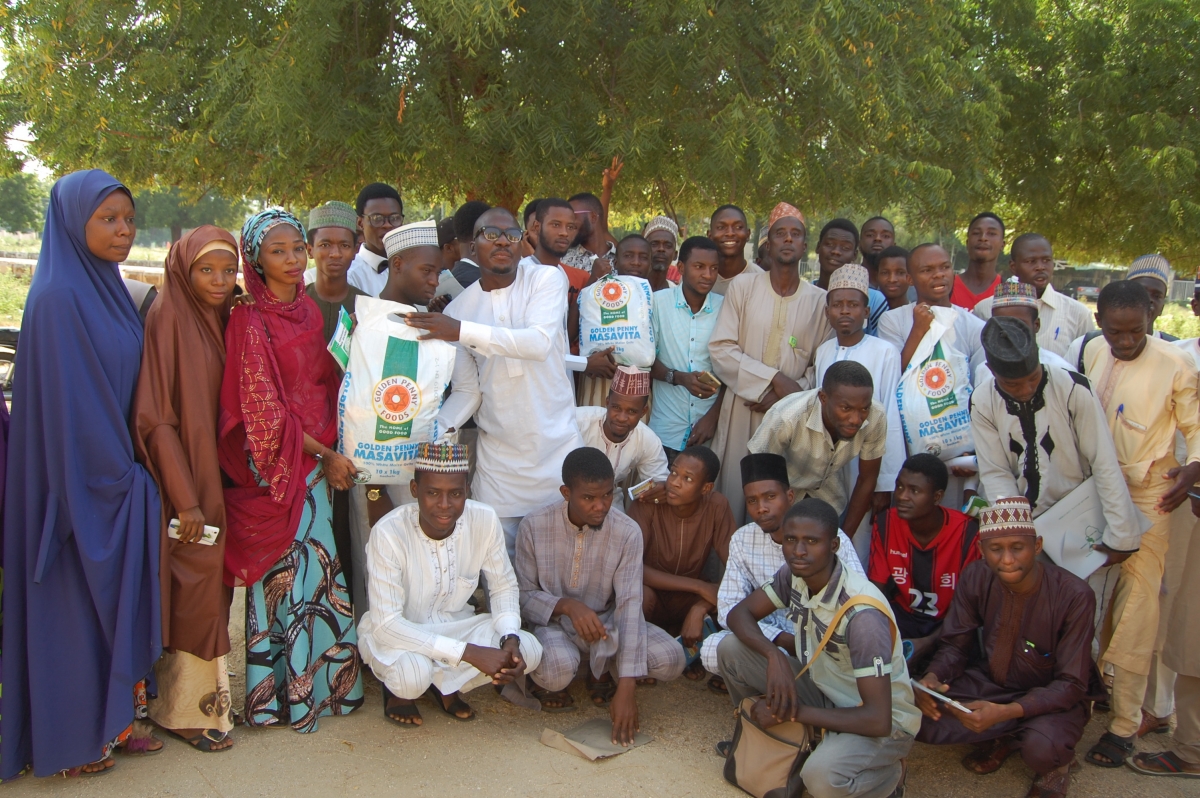 The symposium was greatly supported by the Northern Nigeria Flour Mills and the Department of Agricultural Economics (KNUST, Wudil).

When I grow up I want to be a scientist