With the efforts to bring YPARD representative office in Albania, YPARD Europe team and Bledar Meta the newly selected YPARD Albania country representative organized an event to introduce the YPARD platform in Albania through an interactive presentation.

The event was held on August 10th, 2017. In addition to presenting the global platform, Bledar also introduced the newly developed ideas for YPARD Albania and also presented the topic: Contribution of agriculture to society and Economy; importance of youth participation in agriculture.

The main purpose of this event was to introduce YPARD Europe in Albania and to discuss what the youth can contribute to the agricultural sector. During the presentation, it was explained how young people can become part of YPARD and how they can benefit from it. This presentation was held in front of a small group of young people with an educational background in the field of agriculture and agribusiness. The presentation was held in the premises of the European Union Information Center in Tirana in the form of a free discussion where opportunity was given to each and every participant to share their opinions about YPARD and the participation of young people in agriculture.

During the discussion, many topics were highlighted by the young participants mainly those which they believe prevent the youth from becoming a part of agriculture and to contribute to the development of sustainable agriculture. One of the main topics discussed was the lack of funding and support from the institutions, as well as long and complicated procedures to benefit from those few grants and subsidies provided by the Albanian government. 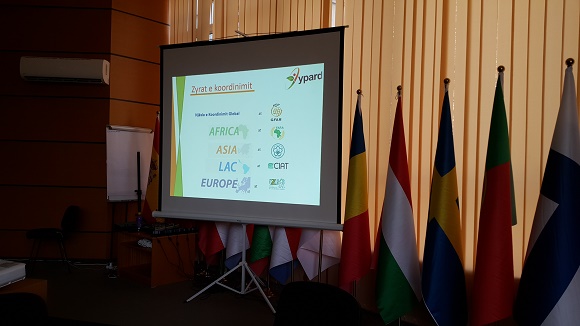 Another very important topic discussed was the lack of a serious network where young people could be informed and share their experiences. Corruption and nepotism that exist in institutions is another major obstacle that prevents them from investing and becoming part of a sustainable agriculture. Infrastructure in the rural areas, lack of professional information offices, etc. were some of the other problems that were discussed.

During the discussion, it was noted that young people's desire and willingness to become part of the agricultural sector and contribute to its development. But they were almost all of the same view that lack of financial support and complicated procedures, as well as corruption and poor infrastructure, were the main obstacles preventing them from contributing to the agricultural sector. Some of the participants also came up with concrete ideas about how they had thought to develop their career and business in the field of agriculture but had encountered many difficulties and found alternative ways out of the sector.

For example, one of the participants showed us a concrete financial plan he had made with his sister to build a small winery since he owned a considerable amount of grapes planted on his land, and with a bachelor degree from the Agricultural University of Tirana in the agribusiness management department and his sister studied with a masters degree from Italy in the field of wine production. But they had faced many difficulties in finding funds to carry out their project in this area and so they stopped and did not go further. This is an example of how young people in Albania want to become part of agriculture, but the difficulties they encounter has caused them to stop and look to other sectors for employment.

The event was quite interactive and the participants became a part of the various discussions with valuable input. Their participation in the discussion came naturally, without the need to encourage them to become part of the discussion, rather they asked many different questions about YPARD and about the development of agriculture in general. As a result of their curiosity and intrigue, they are now excited to know of the existence of a platform for young professional such as YPARD and are  excited to be part of the debate on the development of sustainable agriculture.

The lack of a network where young people can share their experiences, best practices and success stories. Lack of a link between farmers and businesses operating in the field of agriculture.

I believe that YPARD will provide a good opportunity for young people in Albania, to discover themselves and to give an important contribution to the sustainable development of agriculture in Albania.

"Happy New Year" - to be built as we wish it, together!